The following types of natural hazards are identified in the project area, which should be analyzed when performing a natural disaster risk assessment:

The climatic conditions of Tajikistan play a very important role in the development of natural disasters in the country. Almost all the dangers that threaten Tajikistan are related to climate and weather conditions. The analysis of the distribution of natural emergencies (depending on the formation of natural processes that caused them), recorded in database of the Information and Analytical Center of the Committee of Emergency Situations under the President of the Republic of Tajikistan for the period from 1996 to 2010, showed that meteorological events (storm wind, cold snap, heavy rainfall, including hail, droughts) directly caused about 40% of registered natural disasters.

At the same time, it should be noted that for emergency situations caused by mudflow processes (about 20% of cases of registered natural disasters), floods (over 13% of cases of registered natural disasters), in no less than 30% of cases their direct connection with rainfall, and for other cases such a relationship can be established in additional studies. Thus, it should be stated that the conclusion about the leading role of the climatic factors (up to 73% of emergency situations) in the development of natural disasters in Tajikistan is correct.

Landslide processes are most widely represented in the northern regions (Hovaling, Muminabad, Temurmalik, Shurabad). In the remaining regions, small landslides and collapses are predominant, associated with the collapse of accumulative sediments composing terraced, alluvial-proluvial and other morphogenetic complexes of friable deposits. Such phenomena can cause serious damage not so much because of their scale, but because of the large density of residential and industrial objects located on their territory. Insignificant role in the formation of the geological environment of the area belongs to the landslides and scree.

Flooding is a major issue within the Pyanj Basin, as floods have historically caused extensive damage, including loss of life. Measures have been taken in the past to mitigate such risks, but the threat of floods continues to be a major issue. There are a number of contributary factors to the flood risk issue including:

Events that can cause sudden increases in river flows, such as intense rainfall, temporary blockages in drainage systems and the like occur relatively frequently;

A significant proportion of the population live in flood-prone areas because the nature of terrain of the basin means that hillslopes are steep and high ground does not sustain economic activity;

Increasing populations and economic activity put pressures on occupied land in areas where habitable land is in short supply (especially in the upper basin) meaning an increasing occupation of flood-prone lands.

Figure 1 illustrates some of the causes of increased flood risk in Tajikistan, and where such risks are greatest. In the Upper Pyanj Basin the key factors include:

Outburst floods, caused by breaches of temporary blockages to the drainage system, by landslides, glacier movement or similar; 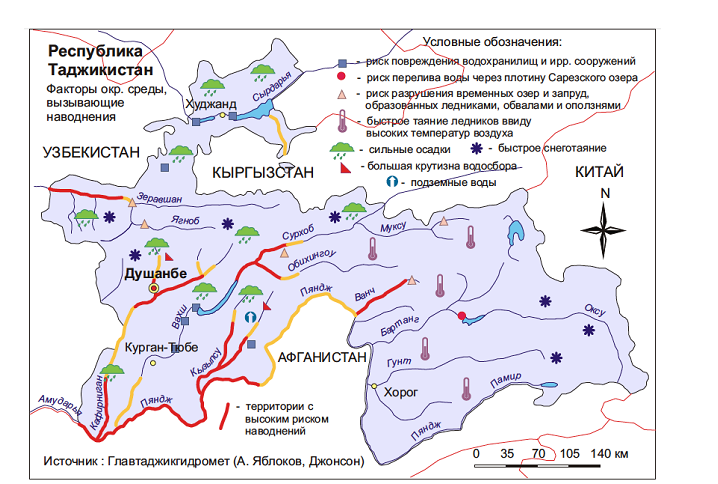 Measures taken to protect against floods in the past have included construction of flood embankments, and river engineering to improve channel capacity. While such measures are effective after construction, they require constant monitoring and significant maintenance effort to maintain their effectiveness. With the economic crisis following the collapse of the Soviet Union such maintenance could not be sustained, so levels of protection provided by such systems declined. There have been many subsequent projects to address key problems with flood protection systems since those times, but overall the work is still incomplete, and levels of flood protection provided are not consistent through the basin.

The ADB has been supporting measures to address flood risk within the Pyanj Basin for a number of years and has provided grants to address key flood management issues, including repair or replacement of flood protection embankments, development of disaster risk management committees and provision of earth-moving equipment to enhance capacity to maintain critical infrastructure. Under the ADB funded Khatlon Flood Management Project (completed in 2014) a prioritization of flood embankment rehabilitation schemes was developed for the Khatlon region, with a total cost in 2009 prices of about US$ 300 million for all works.

There has not been a comprehensive study of flood protection measures within the river basin (such as a river basin flood management plan), and individual projects are developed in isolation rather than through consideration of the catchment-wise issues. Development of a systematic unifying plan for flood management within the Pyanj Basin is not, however, expected to yield large benefits as schemes that could reflect economies of scale for flood management (such as use of flood storage facilities, or systematic changes to land-use and land management) are unlikely to be feasible in the area, or to deliver relatively poor improvements to flood risk.

A flood management plan has been prepared for the basin identifying measures needed to mitigate flooding risks within the basin to 2030. This is included as an Annex 9 to the River Basin Management Plan.

Mudflows are discharges of runoff from land with particularly high sediment content, increasing the density of the mixture of soil and water, increasing its destructive power. In areas with steep slopes, unstable soils and intense rainfall such high-density discharges can be created, and the destructive power can severely damage houses and other infrastructure, and deposit large amounts of soil and rocks once the discharge slows.

Many parts of the Pyanj Basin are susceptible to the generation of mudflows. Addressing the threat from mudflows can involve multiple strategies, such as:

Increasing slope stability and reducing the risk of massive soil mobilization through appropriate planting of trees and drainage systems for vulnerable slopes in critical locations;

Zoning and not building in vulnerable locations; and

Building stronger to be able to withstand the impact of mudflows.

The areas of Tajikistan with high risk from mudflows have been identified in a report prepared by OSCE in January 2019.[1] Figure 48 is extracted from this report. In the Pyanj Basin, the vulnerable areas are:

The OSCE report stated: “Mudflows pose the greatest hazard to the villages in the Bartang, Gunt, Shahdara, Pyanj River valleys ….. where villages are located right on the alluvial fans of lateral tributaries that often carry mudflows or there is a possibility of occurrence along heavy rainfalls. For instance, in the very hot summer of 2015, a heavy precipitation has caused a massive mudflow. Mudflows may be also formed in the places where they have never occurred before, and these streams were before considered non-hazardous (for example, the river near the Barcem village, but should be classified as hazardous…”

Drought has impacted on the basin in the past and is a threat in the future. Problems of inadequate water availability can arise from a number of sources, but generally would be because:

Historical droughts within the country have been identified in the 2017 FAO report[2] in the years 2001, 2003, 2008 and 2011. This report also estimates that moderate droughts (which reduce crop yields by 20%) can be expected about once in three years in the lower Pyanj sub-basin, and once in four years in the upper sub-basin. The report also estimates that severe droughts causing crop yield reductions of 50% might be expected once in six to eight years in the lower sub-basin.

In the 2011 drought it is reported (FAO, 2017) that damage was greatest to orchards and pasture grasses which are not irrigated but rely on rainfall and snowmelt for water for evapotranspiration. Nationally, in 2011 over 135,000 ha of grasslands were reportedly destroyed, with rain-fed cereal crops destroyed over 139,000 ha. The national damage in 2011 was estimated to be USD 18.5 million.

In a paper produced in 2006,[3] a review of drought sequences in the period 2000 to 2003 were reviewed, and key actions identified that were needed to help mitigate the problems presented by droughts. These focus towards development of improved forecasting systems to provide warnings ahead of the arrival of the drought, building increased resilience to drought through measures such as seed development and crop selection and organizational changes to provide timely relief to those suffering during the drought.

A Drought Management Plan has been prepared for the basin identifying measures needed to mitigate risks from droughts within the basin. This is provided in Annex 10 to the River Basin Management Plan.