There are plentiful surface water resources within the Pyanj Basin, particularly as water is very largely needed only within the valleys of the basin where the surface water is already located. There are inter-valley areas without easy access to surface water, but very largely these are deserted, and at high altitude, and therefore there is no need for water in these locations.

Where there are gauging locations with a significant record history, estimates of the total runoff within the main river system can be made. Table 1 summarizes this information while detailed calculations are provided in Annex 6 “Assessment of Water Resources in the Pyanj River Basin Sub-catchments”.

This data implies that runoff in the rivers on average lies in the range 50 to 800 mm a year, with lower values relating to catchments with significant areas within the drier high Pamir mountains, with higher runoff occurring in the upper Yakhsu and Kizilsu catchments, and the north-west Pamirs.

Estimates of mean annual flows in ungauged rivers might be made by using estimates based on a more detailed analysis of such runoff patterns. In the upper catchment, river flow is predominantly driven by glacial melt and snowmelt, and so the peak runoff occurs in the hottest months of the year, rather than those with highest rainfall. Examples are shown in the following figures. 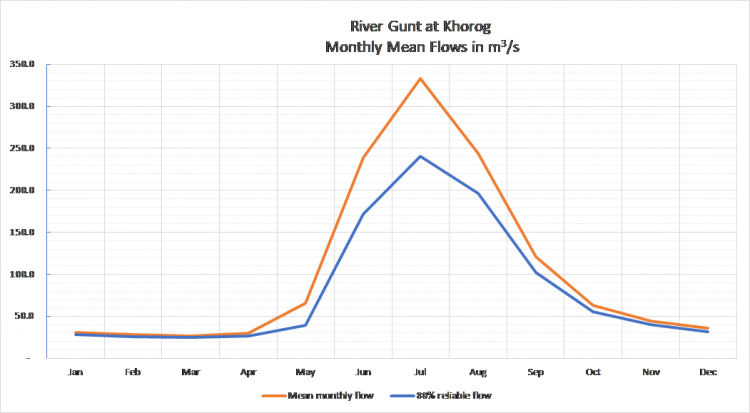 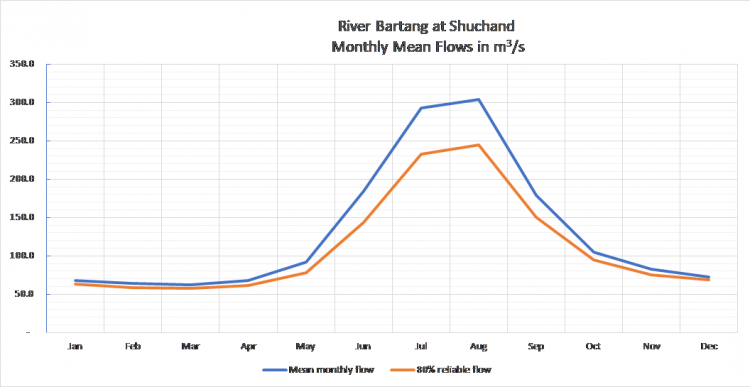 Preparing a composite picture of the seasonal pattern of runoff in these upper catchments shows similar behavior in all major catchments as illustrated in the following figure.

Figure 3: Annual Flow of the Tributaries of Upper Pyanj 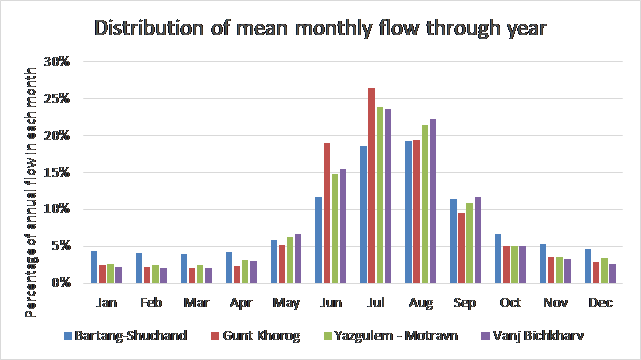 The patterns of flow in these rivers are broadly similar to the pattern within the main Pyanj River, reflecting essentially similar sources of water from rainfall, snowmelt and glacier melt. The peak flow rate arrives earliest in the Gunt river, and latest in the Vanj, reflecting a transition from south to north through the tributaries. The Bartang has the highest sustained flows through the winter.

Within the middle Pyanj in the catchments of the Kizilsu river and its tributaries the land is lower, temperatures are warmer, and the spring rainfall is heavier. In these catchments flow in the rivers is predominantly rainfall-driven, with snowmelt a contributary factor to spring runoff. Typical hydrographs of these river systems are shown in Figure 4 and Figure 5.

Figure 4: Average Monthly Flows of the River Kizilsu at Bobohonshaid

Peak flows are reached in April and low flows from August to February;

Figure 5: Average Monthly Flows of the River Yaksu at Karboztonak

Figure 6: Annual Distribution of Flow of Tributaries in Lower Pyanj 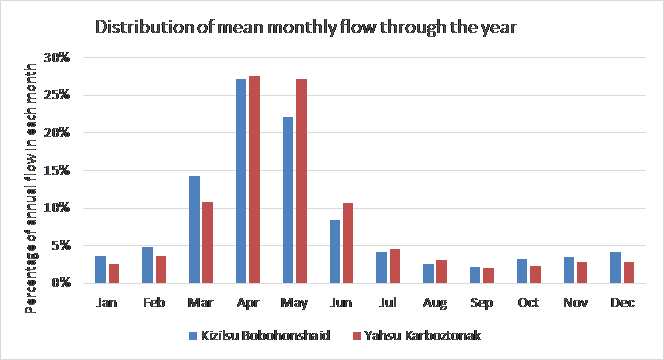 The runoff from these gauged tributaries occurs much earlier in the year than for the upper parts of the catchment, peaking in April and May, with a greater proportion of the annual flow occurring in these months, and a longer period of relatively low flows extending from July through to February. The sharp reduction in runoff in June and July (following the end of the rainy season and with snowpack substantially melted in these lower catchments) creates issues with availability of water resources to meet peak irrigation demands that occur in July and August. For the main Pyanj River, the month-to-month mean flows are indicated in Figure 7. 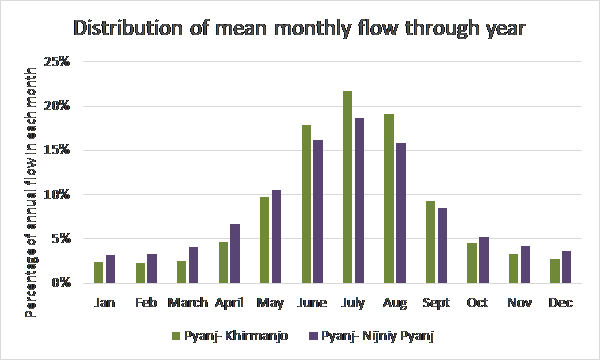 This figure shows that at the upstream site (Khirmanjo) the proportion of the annual runoff is higher in the summer months, with the lower catchment having slightly more sustained winter flows. For the tributary rivers draining the Pamir mountains, a similar analysis is shown in Figure 26.

In addition to the rivers, there are surface water bodies of lakes within the Pyanj Basin. Most of the lakes in Tajikistan are located in the highlands of the Pamir. The largest lakes in the Pamir are Karakul (380 km2), Sarez (86.5 km2), Zorkul (38.9 km2), Yashilkul (35.6 km2). While providing a resource of significant size, there is no significant demand or potential use of the water stored within these lakes because of their location, at high altitude and remote from population centers.

Flow characteristics of the rivers of the basin are a function of the source of water – elements come directly from rainfall from melting of snow, and from melting of glaciers. The proportion of the flow from each element varies through the year, with peak flows from rainfall earlier than snowmelt, which is in turn earlier than glacier melt. With climate change, the proportion of flow from each of these sources is expected to change and will affect the seasonality of runoff.

In the ADB study of 2011,[1] this issue was explored in some detail. Conclusions made at the end of the study have included:

No overall change in annual precipitation is expected, although increases in air temperature are expected to increase the amount of rainfall, ad reduce the amount of snowfall

Monthly rainfall variation is expected to result in increases in rainfall in the period November to January, with reductions in amounts in the rest of the year

The annual runoff of the Pyanj at Nizhniy Pyanj is expected to change over time as indicated in Table 2.

Much of the change indicated in Table 2 arises because of glacial melt, which initially increases due to rising temperatures and then reduces as the volumes of water stored in the glaciers reduce due to reduction of the extent of the glaciers.

Figure 8: Hydrological Map of the Basin 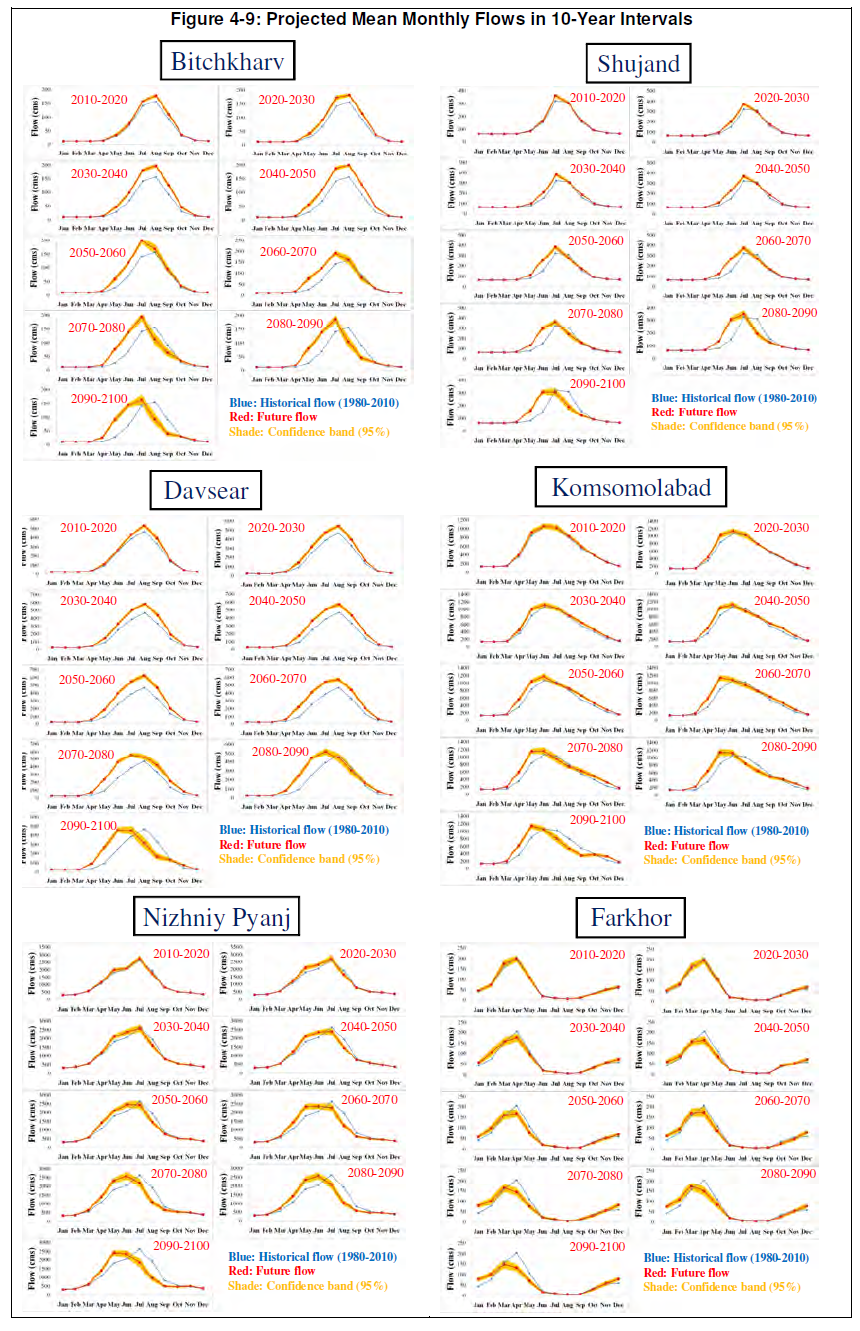 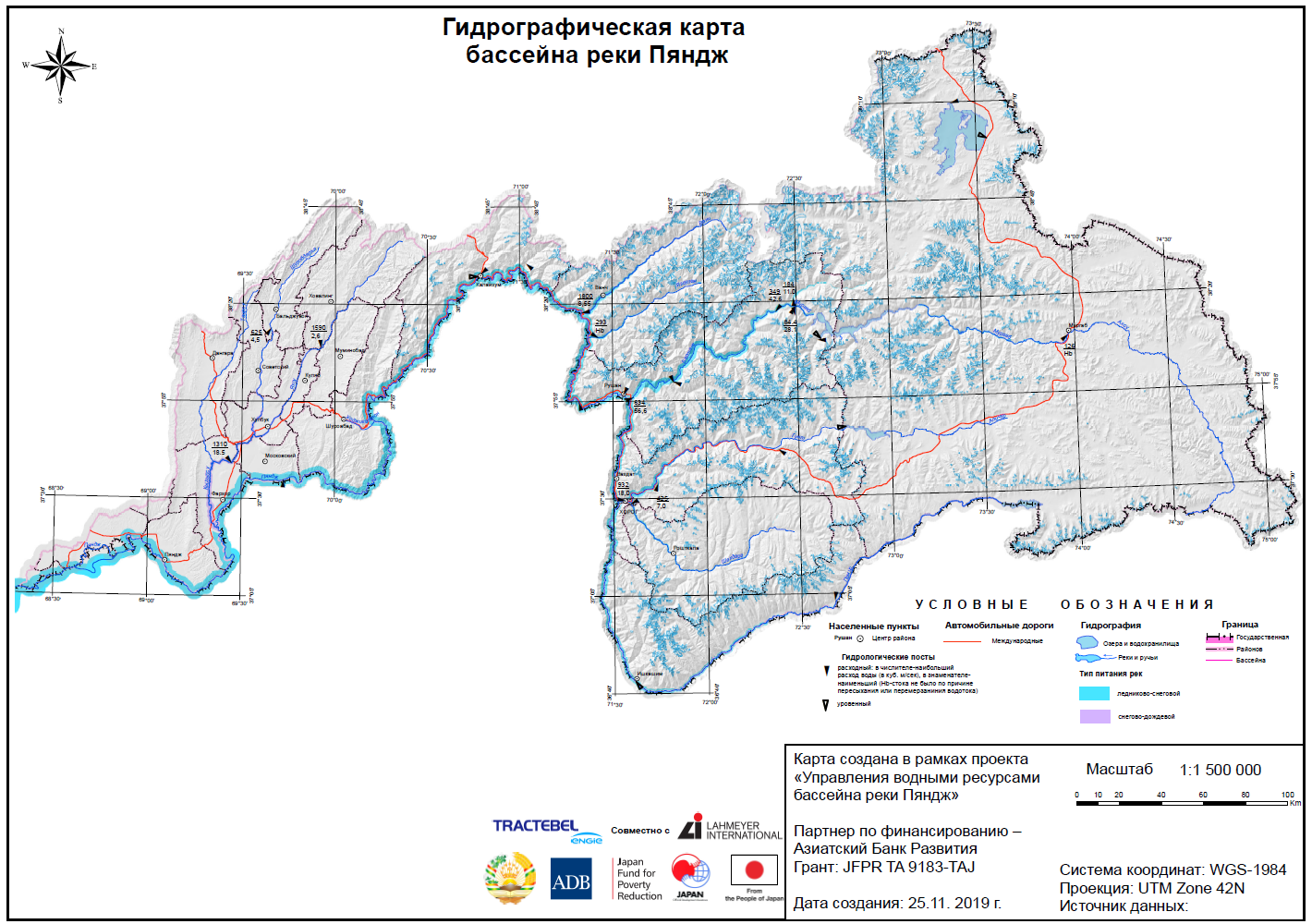 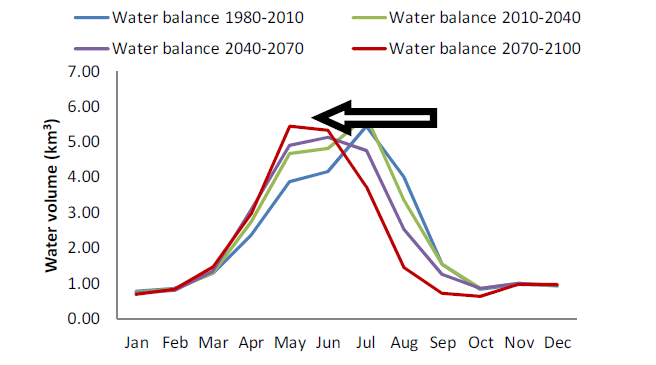 Tajikistan is a mountainous country located in the area of formation of the flow of the Aral Sea basin. The territory of the republic is rich in groundwater: fresh, mineral medicinal, industrial, thermal. The predicted groundwater resources are 51.2 million m3 per day. At the same time, the explored operational reserves of only fresh groundwater of the valley part of the republic amount to 7.6 million m3 per day. The number of active wells for water is more than 4,600.

The ground waters of the republic are extremely diverse in their chemical composition and taste, conditions of occurrence, movement and runoff. In the vertical geological section, two hydrodynamic zones are clearly distinguished:

On the territory of Tajikistan there are two vast areas – mountain and flat. In the mountainous regions of Karamazar, Central Tajikistan and the Pamirs, fissure and fissure-porous fresh waters are widespread. The chemical composition of groundwater is calcium hydrocarbonate with a salinity of up to 1 g/dm3. Local streams of brackish and saline waters form only in the places of development of the plastered and salt-bearing deposits. The depth of groundwater varies from a few meters to 100-150 m. In the Eastern Pamirs, where there is little precipitation and perennial frozen soils are developed, groundwater reserves are small; springs are rare here and function only in the spring.

The most abundant groundwater is usually found in highly fractured limestones and granites. Springs associated with these sediments are characterized by a relatively constant regime. The flow rates of sources can reach 10-15 l/s.

In mountainous areas, dynamic reserves of good quality fresh groundwater are formed. These reserves sometimes reach several hundred cubic meters. Water supply of the majority of settlements and industrial enterprises of mountainous areas is based on the use of groundwater by capturing large springs. Despite the presence of vast natural resources, the operational reserves of groundwater are relatively small. This is mainly due to the lack of favorable conditions for their accumulation.

The flat regions of the republic are distinguished by very diverse hydrogeological conditions characteristic of recent sedimentary deposits found in river valleys, intermontane basins and depressions. In inter-mountain depressions composed of a series of proluvial deposits, lenses of fresh groundwater with a thickness of from a few to 60-80 meters and more are formed. The natural and operational reserves of groundwater can reach hundreds of liters per second; flowing artesian well flow rates can reach 40-70 l/s.

In the intermountain depressions of South-Western Tajikistan, made of loess-like loam with layers of gravel-gravelly material, predominantly brackish and saline waters with dominant sulphate and chloride composition with mineralization of 3-40 g/dm3 are developed. Good quality fresh water is limited. Groundwater occurs at depths of 10-100 m.

Valleys of large rivers are characterized by specific hydrogeological conditions, different for different parts of the basins. Within the mountainous parts, alluvial deposits are relatively thin. Groundwater in the middle and upper reaches of the rivers is hard to access and wells have low productivity. Below the outflow of rivers from the mountain areas, alluvium forms a thick layer (up to 300–800 m) of well-washed boulder-pebble material which is highly permeable.

The valleys of the Kyzylsu and Yakhsu rivers are characterized by the development of groundwater of different chemical composition and mineralization. In the headwaters of the valleys, mostly fresh hydrocarbonate waters are formed. Brackish waters with higher sulphate composition with mineralization up to 5 g/dm3 flow down from the mountain ranges and near the salt domes to the valley. In the lower part of the valley river Kyzylsu. Groundwater in this area can become artesian in the presence of an aquitard above the main aquifer, with some flowing wells found with discharges up to 100 l/s. In the middle and lower parts of the valleys, the salinity of groundwater rises to 2-3 g/dm3.

For official quantification of groundwater resources, aquifers are categorized within the fresh groundwater zone in terms of the level of confidence in the exploitability of the resources. The categories used are:

Category A. Well studied and developed aquifer, with current levels of exploitation less than the estimated sustainable aquifer yield

Category B. Well explored and studied aquifer, with high level of confidence in the extent of the aquifer, and its exploitable yield.

Category C1. Undeveloped aquifer, but nonetheless explored and with confidence in the volumes available, and the water quality parameters

Category C2. As Category C1 but with less detailed exploration particularly with regard to potential changes to groundwater quality with aquifer development.

The quantification of groundwater resources of the basin is summarized in Table 3.

The groundwater resources of the basin are mapped below.

Figure 11: Map of Groundwater Resources of the Basin 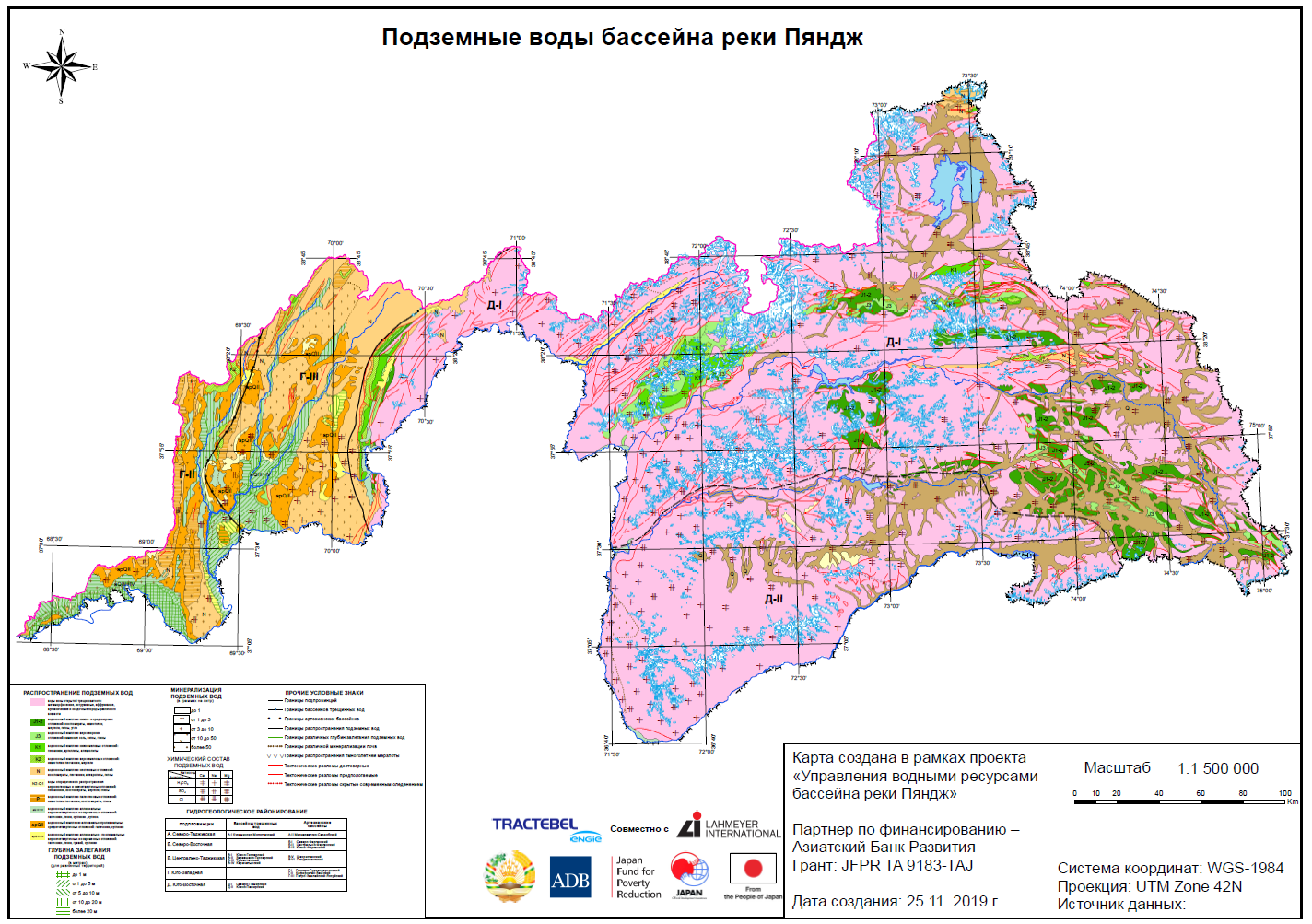 A unique water resources feature of the Pyanj Basin is the Lake Sarez, shown in Figure 12. The lake was formed in 1911, when an earthquake triggered a massive landslide within the Bartang river basin in the Pamirs, causing movement of some 2.2 billion m3 of debris to block the Bartang river in a narrow valley. This caused the natural dam, called Usoi dam, which rises to a height of some 567 meters from the valley floor, retaining some 17 km3 of water behind it. The water surface elevation is over 3,200 m above sea level.

The stability of Usoi dam has been a major concern in the past – its failure would lead to catastrophic flooding a long way downstream down the Bartang and then the Pyanj Rivers. During the Soviet period extensive monitoring systems were established to provide warning of incipient failure, and studies undertaken to try to establish the risk of failure. In 2004 a World Bank study concluded that Usoi dam was essentially stable. 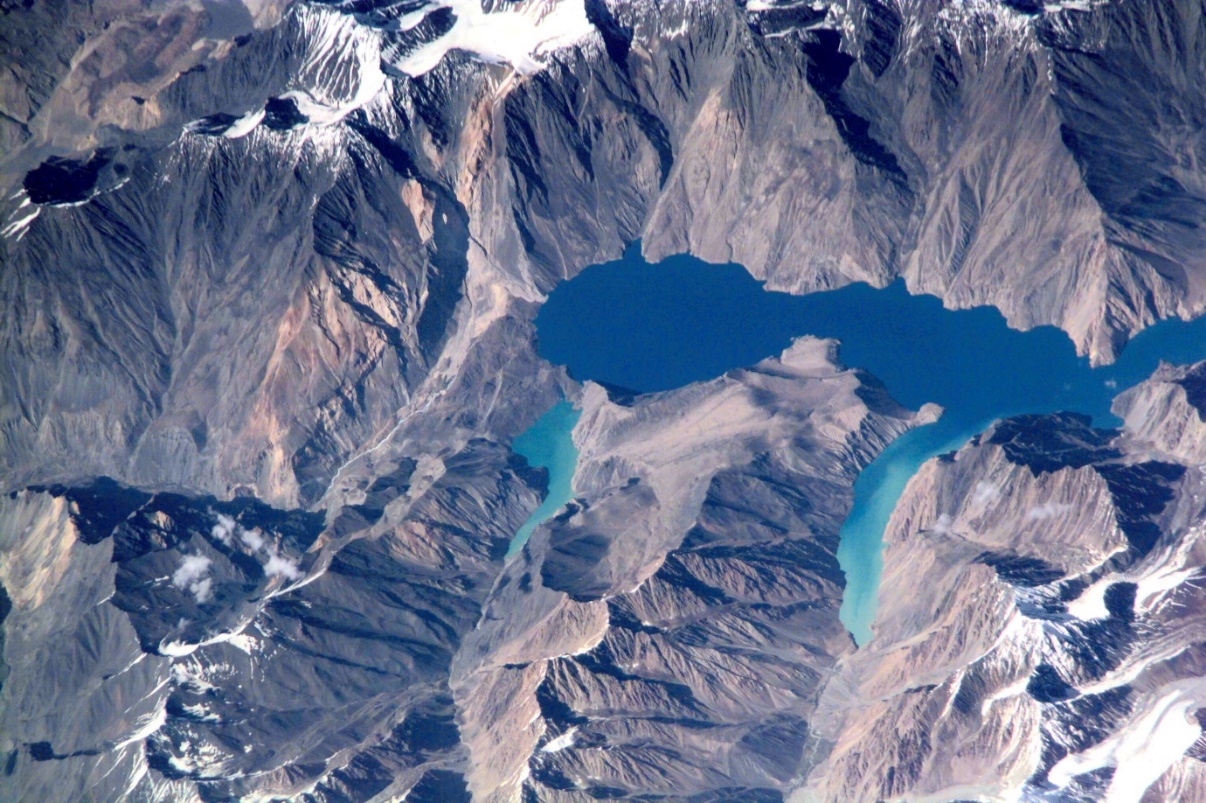 Lake Sarez is located in a very remote part of Tajikistan, so its plentiful water resources cannot easily be used. Seepage from the reservoir behind the dam delivers are relatively constant outflow measured at the Barchadiv gauging station located just below the natural dam.

The seasonal distribution of flow shown in Figure 34 and the year-to-year variability (shown in Figure 14) both indicate remarkable flow consistency. 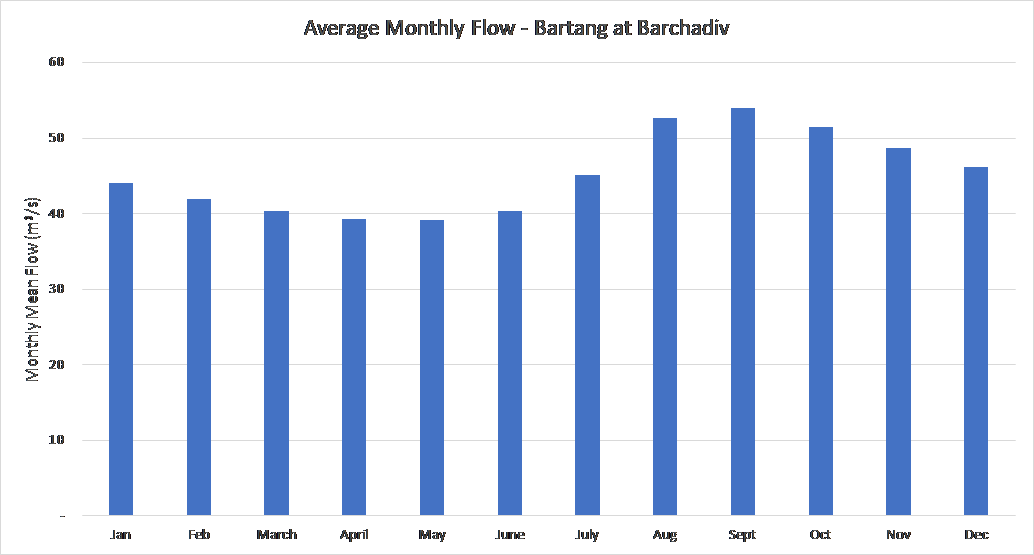 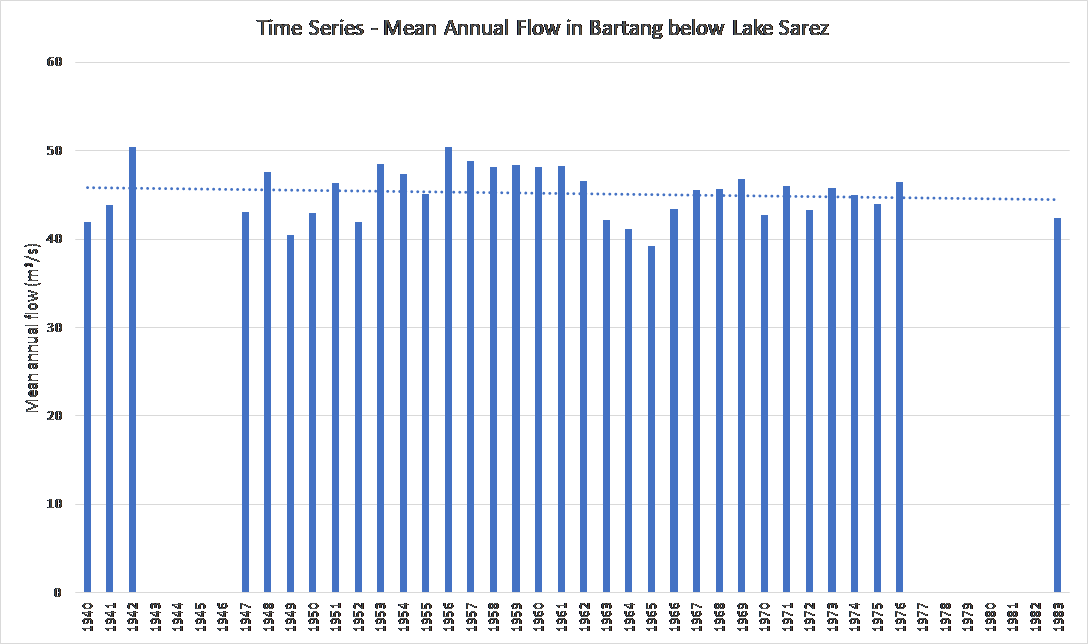 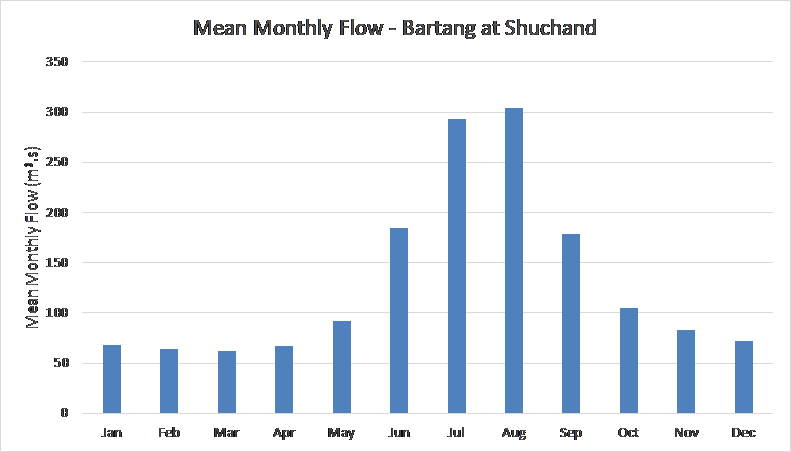