The mountain forest is highly dissected landscape in combination with steppes and alpine meadows. Practically occupies up to 40% of the country’s territory at altitudes of 1,700 – 3,200 m above sea level. This type of landscape has the highest biological productivity along with floodplain tugai. Over 40 species of mammals, more than 130 species of birds and other animals live here. About 80% of summer pastures fall on this territory. Plain plots are used for planting potatoes. It should be noted that in recent years woody vegetation has been cut down everywhere, right up to its complete destruction.

The high-mountain desert landscape occupies the vast territory of the Eastern Pamirs at altitudes of 3,500 to 4,500 m above sea level. Much of this territory is used as distant pasture. Untouched areas include about 60% of the area inhabited by the snow leopard, Pamir sheep. Every year, rare species of birds, including Tibetan sandgrouse and bar-headed goose, come here to spend summers. The unsystematic spontaneous automobile roads near settlements and lakes cause significant damage.

The floodplain tugai forests are located in the deltas of the rivers and on the lowest parts of the territory at altitudes of 300-900 m above sea level. In terms of biological productivity and diversity, they are the richest and have over 600 quintals of biomass per 1 ha. They are of great importance as habitats and wintering of wild animals and birds, especially for the species in the Red Book. In the project area, their small fragments, up to 200 ha, along the banks of the Pyanj River have been preserved.

The sandy-desert belt with semi-timber thinned vegetation. It occupies elevated parts of the floodplains of the Pyanj River at altitudes of 400-600m above sea level. By biological productivity, they are hundreds of times lower than tugay and in most cases are used as pastures for farm animals. They are also the habitats of many species of reptiles and wild animals in winter.

The mountainous areas provide better conditions for livestock breading with natural forage compared to the river valley. Significant pastures in the mountains create favorable opportunities for cattle breeding. In the Pamirs, where only 3% of the population lives, there are more than 5% of the country’s cattle population and 11.2% of sheep and goats. Nowadays, to a large extent, the provision of livestock farming with fodder (concentrated feed, rough feed and succulent) comes at the expense of rainfed agriculture, as well as mountain and foothill pastures, as shown in Table 1.

The largest area occupied by pastures is located in the Khatlon region 1,229,000 ha. Low-grass semi-savannah pastures of thick-column sedge, bulbous bluegrass and numerous ephemers occupy the piedmont plains and low adyrs of Southern Tajikistan at altitudes from 380 to 800 m above sea level. The productivity of dry above-ground mass of bluegrass-sedge pastures varies greatly from year to year – from 2.0 to 22.3 q / ha (gross stock).

The average yield over the 40-year observation cycle was 7.8 centers/ha. Due to extensive use and drought, the entire territory of low-grass semi-savannah pastures is severely degraded. The main indicator of pasture digression is the change in their vegetation.

The upper basin mainly comprises the Pamir mountains, an area of sustained high altitude. Climatologically the Pamir is divided into the Western (25,700 km2, this is approximately 40% of the Pamir territory) and the Eastern Pamir (a vast highland plateau of 38,000 km2).

The Eastern Pamir characterized by a sharply continental climate with cool summers and severe winters with little snow. The duration of sunshine here is over 8 hours per day on average. The winter in the Eastern Pamir is very severe, with an average January temperature of about -200С, and the absolute minimum can reach -50°С. Summer temperatures are also low. The July temperature at altitudes of 3,600-4,000 m ranges from +8 to + 12°С. Precipitation in the Eastern Pamir falls evenly throughout the year, but their total amount is very small (120-150 mm).

The rivers of the upper basin flow year-round and lie in deeply-incised valleys. Slopes to the rivers are steep and unstable, with rock-falls and mud-slides adding considerable sediments to the rivers. These steep valleys offer very limited opportunities for habitation or farming, meaning communities are widely spread, and isolated in winter months. Vegetation does not grow on the hillsides and mountain tops, only in isolated pockets where slopes become flatter, which most frequently occurs on the valley floors. The rugged scenery of this area offers considerable scope for tourism, if the area were more accessible.

The middle and lower Pyanj has major tributaries draining lower lands to the north and west of Kulyab through the Kizilsu river system, as well as mountain streams contributing flow to the main Pyanj River through small direct inflow to the main river, and significant flood-plain areas in the lower system where waters of the river are used to support irrigated agriculture in the Farkhor-Hamadoni area and in the Pyanj area.

The catchments of the Kizilsu and its tributaries drain the mountains of the area to the north and east of Dangara, and the mountains to the north of Kulyab. This area has significant snowfall in the winter but is warm in the summer. Above-zero temperature contributes to the beginning of the active growing season of plants, is maintained for up to 250-300 days per year in the lower areas. The duration of the frost-free period is from 260 in the lower part, but only 90 days in the upper part of the catchment. The period with air temperature above 10°C in the valley part is 250-300 days. In the hottest months, the absolute-maximum temperature in the valleys rises to 45-47°C, and above 2,000 m above sea level it is only up to 30°C.

Impact of Forests on Water Resources

Figure 1: The Main Glaciers of Tajikistan 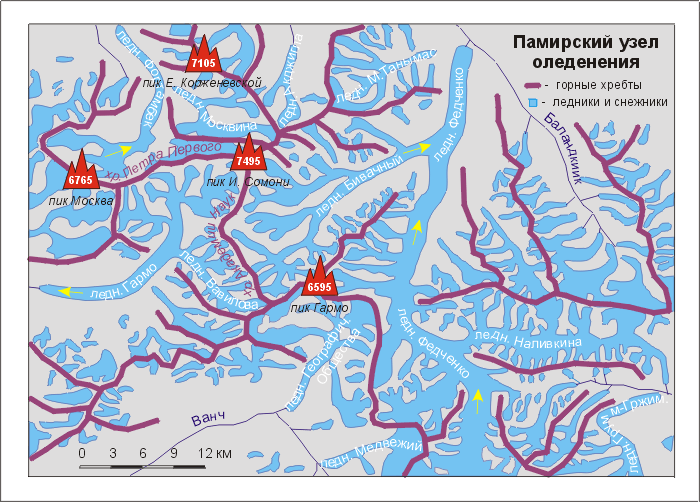 Groundwater can have poor mineralization with a depth below 3 m;

The Kulyab zone (valleys of the Yakhsu and Kyzylsu rivers) characterized by the presence of groundwater of different chemical composition and salinity. Groundwater here is estimated at 1.4 km3/year. From mountain ranges and near the salt domes of Khoja Mumin and Khoja Sartez, salty waters with a mineralization of up to 5 g/l flow into the valley.

nival, with marl soils among glaciers, snowfields and rocks.

Light sierozems formed in a dry, hot climate, have poor vegetation cover, contain little humus, are rich in lime, and often contain easily soluble salts. Under certain conditions, they are subject to secondary salinization. These soils are common in the valleys of the Syrdarya River, the lower reaches of the Pyanj, Vakhsh and Kafirnigan rivers at an altitude of 300-600 m and above.

Ordinary sierozems contains slightly more humus and is also rich in lime. They are less prone to salinization. The sierozems occur in the Yahsuiskaya, Kyzylsuiskaya, Yavansuiskaya and other valleys and on the Dangara Plateau at an altitude of 600 to 900-1000 m.). At more higher altitudes, due to increased precipitation and enrichment of vegetation cover, ordinary sierozems turn into dark ones (Gissar Valley, Zeravshan Valley, etc.).

Dark sierozems are the main irrigated fund of the country’s lands. Under the influence of many years of irrigation and processing, they acquired the features of highly productive cultivated soils. The middle mountains in the country are occupied by mountain brown soils, which can be traced on the slopes of ridges at altitudes from 1,600 m to 2,900 m. 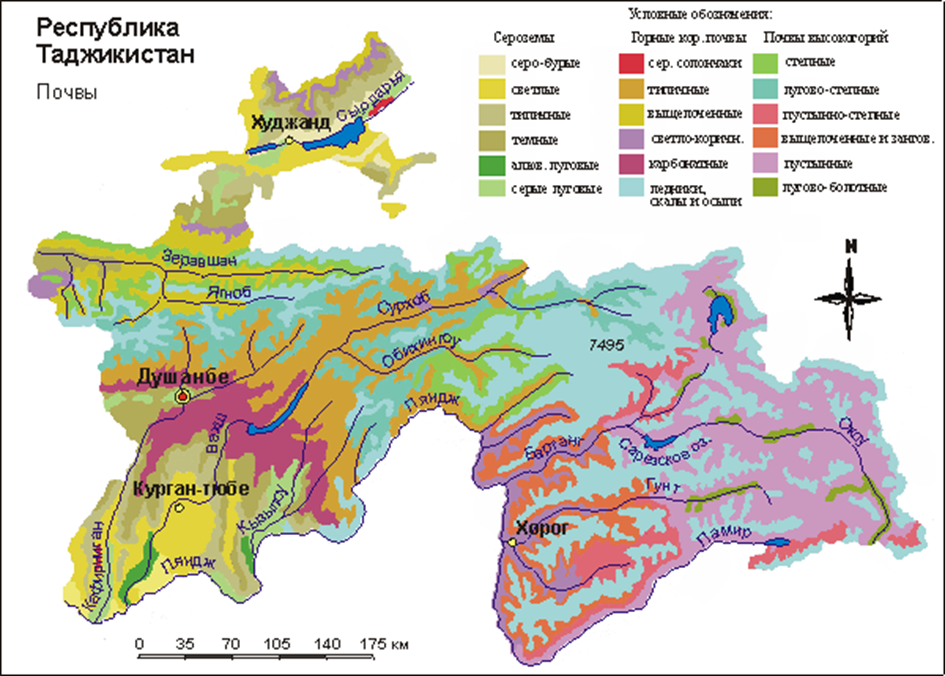 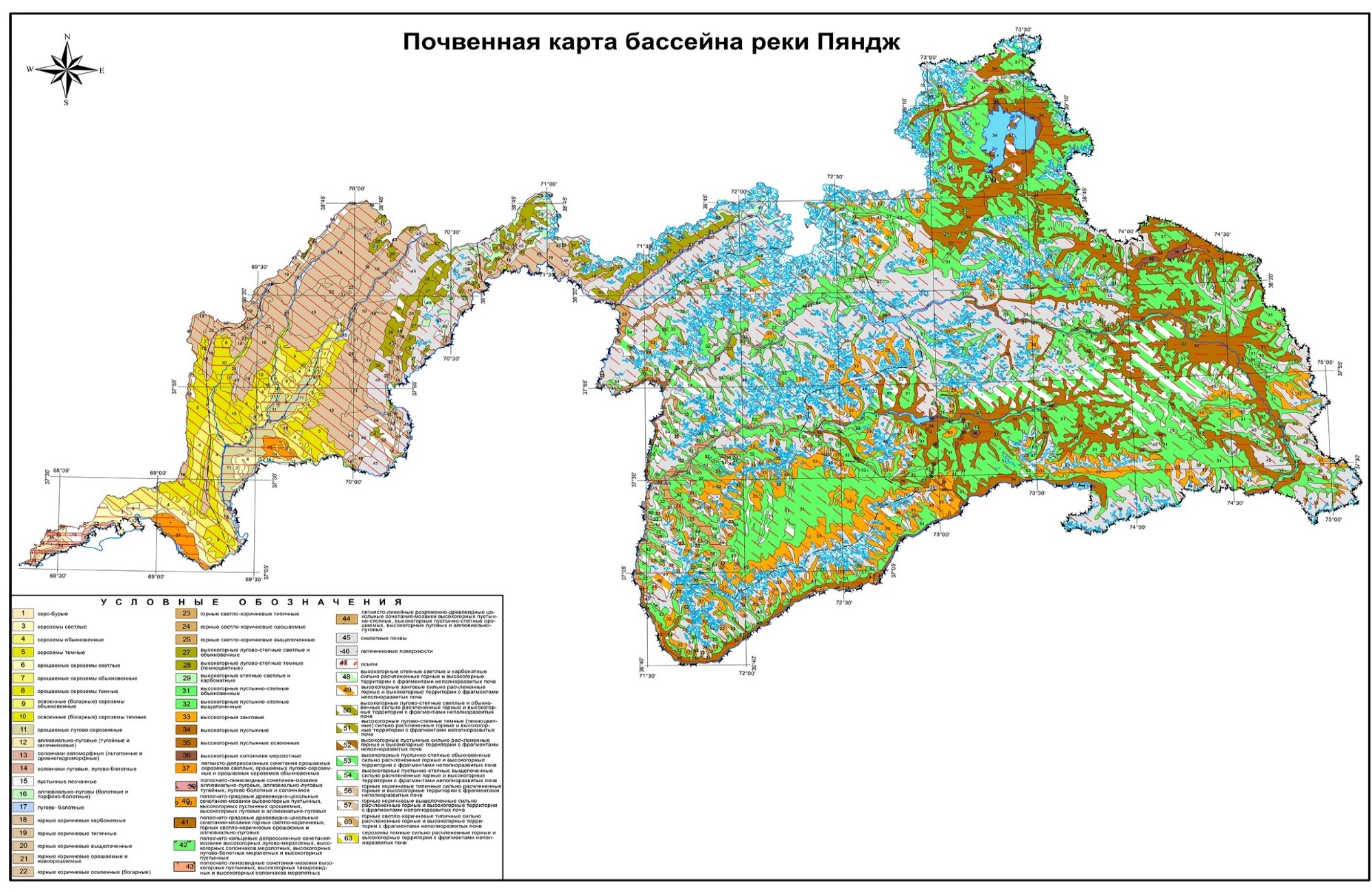 LAND USE AND AGRICULTURE 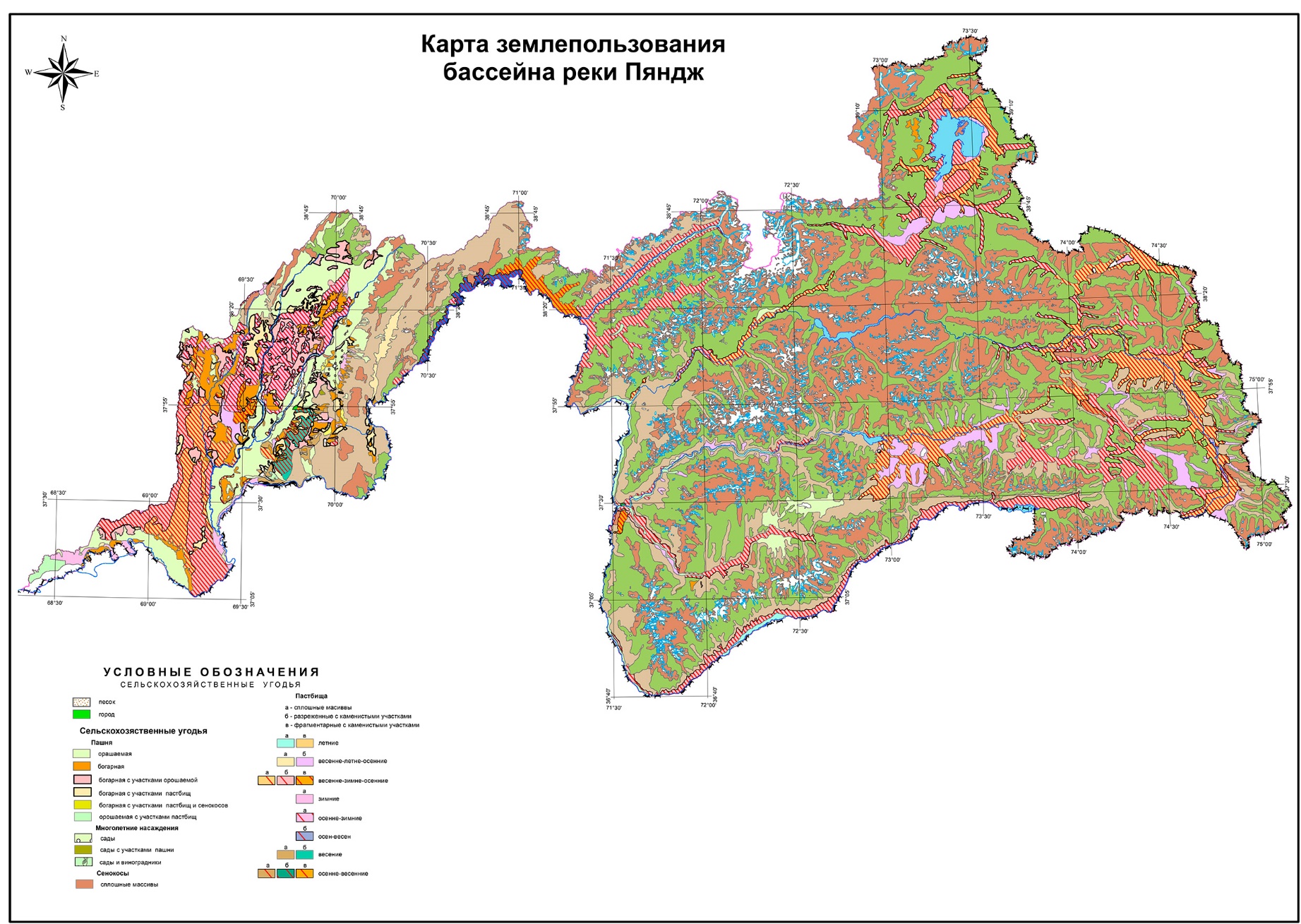